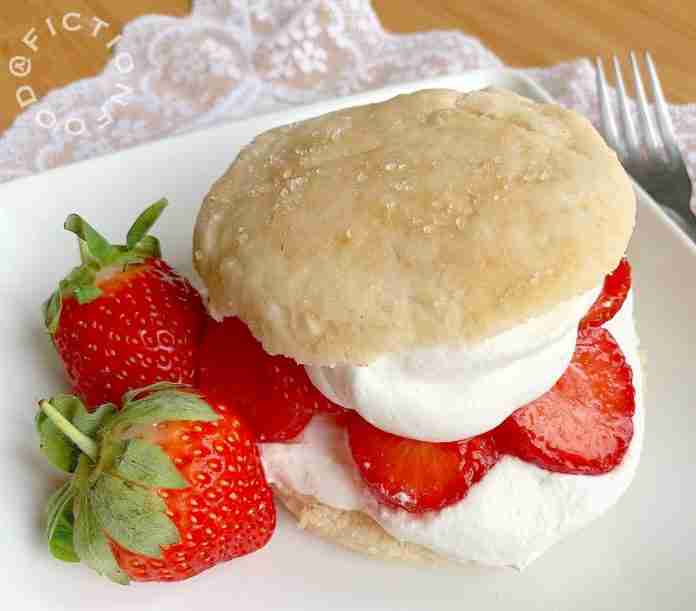 “Earnest, loyal, and trusting almost to a fault, Commander Gren serves as General Amaya’s lieutenant and Sign Language interpreter. Despite his status as a member of the Katolis army, Gren does not wield a weapon: he considers himself more of a diplomat than a fighter. Peaceful and soft-hearted, Gren is happiest at General Amaya’s side, both her voice and closest friend.”
–The official The Dragon Prince website

Today happens to be Commander Gren’s birthday from The Dragon Prince animated series on Netflix! His favorite food for his birthday is strawberry shortcake, though through General Amaya’s good intentions (and apparently atrocious baking skills), he doesn’t always get (an edible) one.

“Gren prefers to keep things low-key for his birthday, but for years he’s been unable to because of Amaya’s love for surprise parties. Over the years he’s grown fonder of the parties, while growing more fearful of his favorite birthday treat, strawberry shortcake. He knows Corvus bakes a mean cake, but ever since he’s given in and begun letting Amaya help him prepare the birthday snacks, Gren’s found everything from clumps of flour to egg shells in those once-delectable bites. “Will Corvus be able to make the cake alone this year?” Gren wonders… We’ll find out January 17th.”
–The official The Dragon Prince website

The creators and crew of The Dragon Prince have been so great to the fans, and have even begun sharing fun facts about the characters’ birthdays. For January, three characters have birthdays beginning with Gren on the 17th, followed by Soren on the 19th, and King Harrow on the 20th. Whereas Gren loves strawberry shortcake, Soren loves a pile of pancakes and waffles with whipped cream and sweets, and King Harrow loves a kind of Stone Soup-type communal stew where everyone contributes an ingredient. If you’d like to make waffles for Soren, try these waffle recipes and this pancake recipe, and if you’d like to make a yummy stew, try this beef stew recipe.

Note: I’ve included the recipe for making homemade whipped cream below, but you can totally use Cool Whip if you’d like. And instead of using fresh strawberries, you could use strawberry jam. You could even fold the Cool Whip and jam together if you wanted. 🙂
Also, in the recipe below I’ve given instructions for sugaring the strawberries so they soften, sweeten, and have some juice, but you can forgo that and simply use fresh strawberries if you’d like, no problem!
Makes about 4 little shortcakes.

Directions:
Toss the sliced strawberries with the 1 Tbsp. sugar & chill in the fridge for a short while, a few hours, or overnight (optional if you’d like sweeter, softer berries with some juice. The longer they sit in the sugar, the softer they’ll get).
Place a metal mixing bowl & whisk attachment in the freezer (if you’re making homemade whipped cream).

Pre-heat oven to 425ºF. Line a baking tray with parchment paper or Silpat.
In a med bowl, whisk together the flour, sugar, baking powder, & salt.
Cut in the cubed butter until the mixture resembles little crumbs.
Fold in the milk until the dough just comes together, but don’t over mix!

Gather the dough into a ball & pat out on a lightly floured surface to about 1″ thick.
Use a biscuit cutter or large circle cookie cutter to cut the dough into discs, & then place the discs onto the baking tray about 1 1/2″ apart.
Note: If you don’t have a circle cutter, it’s fine to pat the dough into a rough square & cut into smaller squares.

Brush the tops of the biscuits lightly with milk & sprinkle on some granulated sugar.
Bake for about 10-12 minutes, or until puffed up & just beginning to turn golden on the bottom edges. Remove from oven & cool on a cooling rack.

Remove you mixing bowl & whisk from the freezer & pour in the heavy cream.
Whisk on high for several minutes, adding in the powdered sugar after the first couple of minutes.
Whisk until the cream has expanded & medium-soft peaks form. Do not over whisk or it’ll separate into butter!