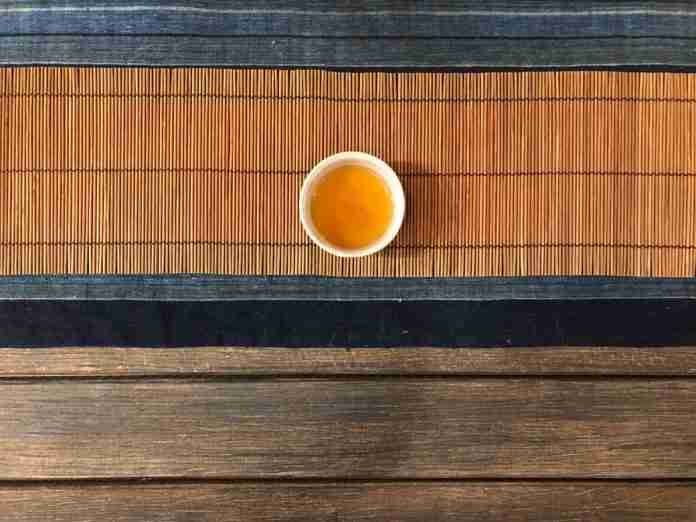 New York City is often seen as a vanguard of trends, of things to come. It is said, “If you can make it in New York City, you can make it anywhere.” For a town that is remarkably one dominated by (sometimes excellent) coffee, by an unwavering need for speed, and for a mentality that “time is money,” tea seems to be a beverage that would not survive. But despite all that, within the last 10 years a new generation of teahouses has emerged, bucking these trends and indicating that, amidst all the urban clamor and rat race, there is not only a place but a need for spaces where people can slow down and focus on the meditative act of making tea.

To be clear: I am not talking about the onslaught of now-ubiquitous, trendy, and Instagrammable to-go matcha lattes. These new teahouses purvey directly-sourced, single-farm, hard-to-come-by teas from the far off tea-producing mountains of East Asia. Brewed mindfully and traditionally (whether whisked or steeped), these new teahouses are in themselves a reflection of a growing appreciation in America for a standard of tea that is more commonly found in Kyōto, Hong Kong, Taipei, Seoul, or the mountains of Yunnan or Northern India.

Best of all, while some teas can range in price up to hundreds (if not thousands) of dollars per cup, these shops in New York instead curate focused menus of excellent teas that encourage price-savvy exploration before breaking one’s budget. And with their founders dedicated to educating their clientele, these listed teahouses are the perfect places to navigate the vast world of tea in NYC.

Kettl is a tiny jewel box of Japanese tea and teaware in Brooklyn’s Williamsburg neighborhood. Located above the locally-renowned Japanese breakfast and ramen joint Okonomi/Yuji Ramen, a journey up a flight of stairs reveals a sparsely-furnished space filled with a wide variety of high-quality loose leaf teas from all corners of Japan. Inspired by travels throughout the Japanese archipelago, owner Zach Mangan imports teas that aren’t often available outside of the regions in which they are produced. This approach to showcasing “local varieties” means that in addition to stocking some of the best sencha, gyokuro, and matcha available in the United States, Kettl also contains exquisite examples of teas even highly versed tea drinkers might never have enjoyed, including single-varietal tamaryokucha (pan-fried, coiled tea produced in Kyūshū), kyo iribancha (late-harvest, deeply-roasted full-leaf tea with notes of pine resin and tobacco), and rare Japanese black teas from Ureshino and Yame (which often exhibit flavors of apricot, grape skin, and osmanthus).

Kettl, while mostly operating as a farm-direct online purveyor of fine Japanese teas, keeps its retail space in Williamsburg open for in-store sales, education, and sampling of any of their more than 30 distinct teas that regularly shift with the seasons. All teas here are refrigerated to ensure their freshness, and Kettl’s selection of teawares, from tea bowls for Japanese tea ceremonies to teacups and teapots for daily use, are all of excellent quality, produced both in Japan and by local New York ceramicists.

Opened in 2017, Floating Mountain Tea House is one of New York City’s most recent additions to a growing constellation of excellent tea spaces. Taking cues from classic East Asian teahouse design (with a dose of Manhattan gallery minimalism), the space is clean, meditative, and intimate. Featuring over 90 different whole leaf, single-origin teas from China’s famous tea producing regions, Floating Mountain is not only a great place to taste the depth and breadth of tea styles, but is also one of the best locations in the United States to learn about the subtle differences between different regional varieties. Here you can explore rare varietals of hong cha (“red tea”) produced in the eastern province of Fujian to new, aged pu’erh tea grown in China’s southwestern region of Yunnan, green teas from Sichuan, and single grove “Phoenix” oolong teas grown in the mountainous region of Chaozhou in China’s southern Guangdong province. Paired with Chinese porcelain and clay ceramics, guests are guided on how to brew tea by owner and founder Elina Medvedeva in the traditional gong fu cha style, where each tea is skillfully brewed to express optimal flavors.

In addition to directly sourcing all of her teas from small, single-plot farms in China, Medvedeva organizes tea educational events, private tea tastings, meditations set to tea, and even chi gong courses. Floating Mountain is typically most busy on weeknights and on the weekends, with early afternoons being the best time to grab one of the four low tables or a place at the tea bar. Floating Mountain is located just minutes away from Central Park and Lincoln Center in Manhattan’s Upper West Side, making it ideal for those seeking to fully enjoy the city—and then escape from it.

What to drink: A pot of Lao You Hua Xiang (“Old Tree Pomelo Flower Fragrance) Phoenix oolong from Chaozhou, China

29b Teahouse is equal parts upscale Japanese-inspired restaurant, East Village bohemian drinking den, and full service gong fu cha tea bar, mixing an elegant straightforward presentation of whole leaf traditional teas from Japan, Korea, China, Taiwan, and India with innovative pairings of wine, beer, soju, and sake. What first began as a private tea sourcing venture and pop-up shop begun by founder Stefen Ramirez in Brooklyn’s Williamsburg neighborhood has taken full flight in lower Manhattan, as 29b is now one of the largest tea spaces in the United States. The layout incorporates a central bar where tea and tea-infused drinks are masterfully prepared, alongside ample table seating for both tea drinking and relaxed dining. While featuring stellar teas from all across East Asia, 29b features some of the nation’s best (and hardest to find) Korean green teas and tisanes, as well as thoughtful tea-infused alcoholic drinks, including a must-have matcha and rice beer, as well as a rotating menu of soju and sake-infused cocktails.

29b currently features one of New York City’s most diverse menus of teas, tisanes, and tea-infused beverages. They feature a regular calendar of tea tasting events and classes, and offer a wide selection of privately-commissioned teawares from master ceramicists. This place is heaven for late-night tea lovers, folks looking for a great date spot with plenty of non-alcoholic options, and fans of considered bar design.

What to drink: 29b’s signature matcha beer or a pot of organic Woojeon (“pre-rain”) Korean green tea from the Jiri Mountains, South Korea

Named for a distinctive style of fermented tea that comes from the mountains of Yunnan province in southwest China, Puerh Brooklyn carries well over 20 different types of puerh, as well as a diverse array of other teas, from red, black, oolong, white, yellow, and green from China, Taiwan, India, Sri Lanka, Japan, and Nepal. Located in an airy two-floored teashop in the heart of Williamsburg, co-owner and founder Gabriel Grippo has built a shop where the community comes to enjoy tea in a relaxed and casual style. Originally begun by Grippo in 2001, the current space was purpose-built to include tea alongside with his two other passions: clothing design and art. (The space includes an active clothing design atelier and gallery.)

Entering through the street-level upstairs, guests are met with rows of shining canisters full of loose leaf tea, large ceramic jars filled with stacks of aging puerh cakes, and teapots made by renowned local and international potters. Descending to the open, gallery-like lower level, stark cement walls are juxtaposed by the organic lines of wooden tea tables, carpets, and teaware set for both casual tea brewing and the occasional meditation meet-up. Set below the clamor of Williamsburg, Puerh Brooklyn’s tea space is a hidden gem and welcome respite in busy Brooklyn, a great place to find peace and explore the vast world of tea at a natural pace.

Tucked down a long corridor off of SoHo’s quiet Elizabeth Street, T Shop is one of those perfect New York “hidden gem” spots. In a relaxing, no-frills environment of small tea tables and a long tea bar, T Shop delivers what is easily some of the best Chinese, Taiwanese, and Korean tea New York City has to offer. The space encourages brewing at your own pace, with simple gong fu cha set up and the option to brew one’s own teapot or gaiwan (a traditional Chinese tea brewing cup). With a strong, die-hard community of regulars but a welcoming and accessible vibe, T Shop is a great place to first enter New York City’s tea world.

Teas here are sourced by Theresa Wong and Hyun Lee, who regularly travel to Asia visiting tea farms and tea collectors to bring back teas that are of exceptional quality. While the regular menu features a highly-curated selection of teas, private tea tastings often include many rarer “off menu” teas that Wong and Hyun have procured in limited quantity. As such, a single visit will never fully reveal the depth of what T Shop has to offer. Better to go once, then again, and before you know it you may find yourself fitting in alongside the regulars.